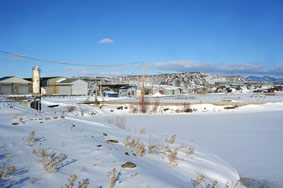 During the early to mid-1970s the State of Montana Air Quality and Water Quality Programs began conducting investigations of smelter emissions and surface water discharges at the ASARCO East Helena smelter. Early results of air quality and soil metals analysis confirmed the long-held suspicion that arsenic, lead, cadmium and other contaminants were accumulating in the soil and water, and were also present at high concentrations in street and household dust throughout the community of East Helena.

In September 1984, the U.S. Environmental Protection Agency (EPA) listed the East Helena Site on the National Priorities List (NPL) pursuant to Section 105 of the Comprehensive Environmental Response, Compensation, and Liability Act (CERCLA). From 1984 through 1997, the limited investigations and remedial actions conducted at the Site by ASARCO consisted of either voluntary actions or actions implemented as part of settlement agreements between EPA and ASARCO under CERCLA.

Under CERCLA, the site was divided into five operable units (OUs):

In 1989 EPA issued a Record of Decision (ROD) to address OU1, which included the following actions:

In July 1991, ASARCO began a non-time-critical removal action of contaminated soil from residential areas, parks, playgrounds, streets, and alleys in the community of East Helena. ASARCO conducted much of the cleanup from 1991 to 1996 but it is still ongoing. The ROD for the residential soil operable unit was only issued in 2006.

In January 1998, ASARCO and EPA agreed to a multi-million dollar settlement for violations of RCRA and the Clean Water Act that included illegal burning of hazardous waste. The settlement specified a Supplemental Environmental Program and an Environmental Management System for the smelter operation. It was decided that RCRA would be the governing authority for corrective actions related to the former plant site and groundwater. Superfund would continue to be the governing authority for cleanup of residential and agricultural soil in the community, as well as any surface water source that may require cleanup.