The East Helena landscape is dominated by the estimated 16-million-ton pile of slag that occupies almost half of the former ASARCO smelter property. Slag is the stony, black by-product of smelting, which occurred for more than a century at the East Helena Site. The Montana Environmental Custodial Trust (the Custodial Trust) has been pursuing options for repurposing the slag and continually evaluates how slag contributes to groundwater contamination.

The slag has reprocessing value for secondary metals recovery, and the Custodial Trust has been actively discussing alternatives with interested parties. In late 2020, Montana Environmental Trust Group (METG), Trustee of the Montana Environmental Custodial Trust, announced that it entered into an agreement with Metallica Commodities Corp., an international metals trader based in White Plains, NY. Metallica will remove and transport 2 million tons of unfumed slag which has recoverable zinc. The unfumed slag will be crushed and loaded onto trains, transported by rail to the Port of Vancouver, B.C, and placed on ships for delivery to one of the world’s largest zinc smelting facilities, located in South Korea.

Montana Rail Link began construction work on a new rail siding in late 2020, and slag crushing began in spring 2021. The project is expected to take about 5 years. Once Metallica has completed removing the unfumed slag, the Custodial Trust will proceed with regrading the remaining slag and installing a vegetative cap over the pile to prevent arsenic and selenium from leaching into the groundwater. This is the final remedy for groundwater at the Site, as proposed in the Corrective Measures Study (CMS).

Unfumed slag in the slag pile currently contributes about 75 percent of selenium loading to groundwater at the Site. Removing the so-called upper lift of the slag pile will not only eliminate the last major source of selenium but will ultimately reduce the height of the pile by over 50 percent. Once regraded and capped, the remaining pile will have a cover that is green and during the growing season.

The project will result in cost savings on the planned regrading and capping, and project proceeds will go into the East Helena cleanup account for future cleanup actions at the Site.

All rail loading will occur on-Site, requiring no public road crossings and involving no truck traffic. A number of measures will be implemented to control and suppress dust, including the use of water and surfactants.

For more information on the slag project, see our fact sheet here. 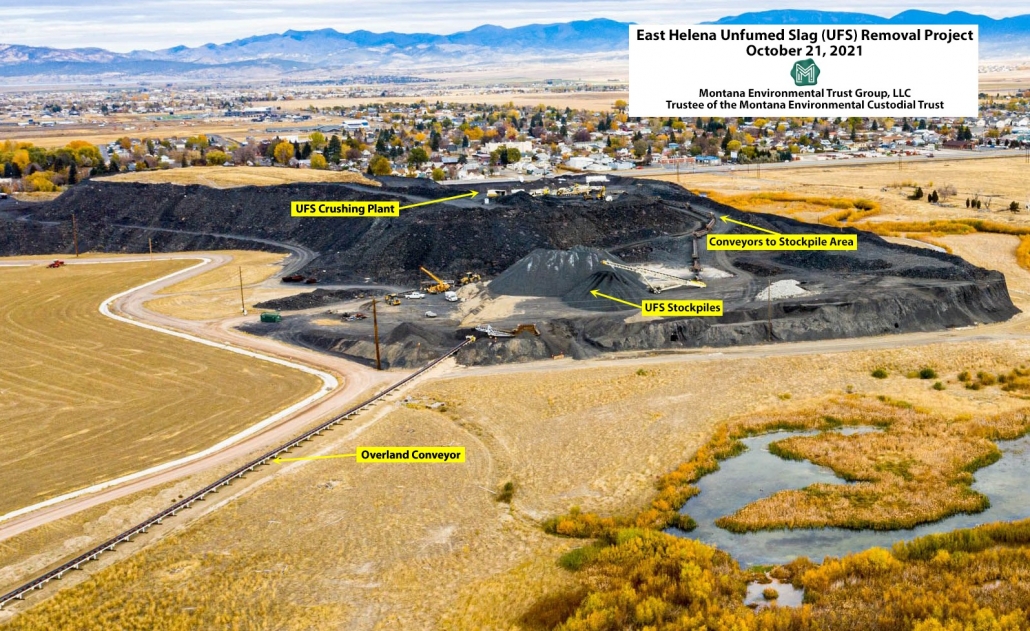 This aerial figure illustrates parts of the slag removal process at the East Helena Site. After being crushed and removed from the pile, unfumed slag will be loaded onto trains and transported to the Port of Vancouver, B.C. for transport by ship to South Korea.

This page was updated in December 2021.