In October 2018, the Montana Environmental Custodial Trust (the Custodial Trust) completed the sale of the 254-acre Lamping Field property to an affiliate of Butte, Montana-based Town Pump, Inc. (Town Pump) for a mixed-use development. The Custodial Trust also closed on the sale of two Dartman Field parcels—35 acres in November 2018 to the East Helena Public Schools (EHPS) for a new high school, and 100 acres in December 2018 to Billings, Montana-based Oakland Companies for a 319-unit, single-family residential development.

The Custodial Trust’s land sales mark a turning point in the transformation of one of the country’s most complex hazardous waste sites, and the integration of community-supported reuses into remediation of former American Smelting and Refining Company (ASARCO) lands in East Helena.

According to Betsy Burns, the U.S. Environmental Protection Agency (EPA) project manager for the East Helena Site, “EPA supported the appointment of the Montana Environmental Trust Group to serve as Trustee of the Custodial Trust because of their track record of successfully remediating and redeveloping large, complex federal Superfund sites throughout the country. The Trust has far exceeded EPA’s goals and expectations in East Helena.”

According to Harley Harris, who oversees the State of Montana’s Natural Resource Damage Program, “The combined effect of the three transactions. . . represents a significant milestone in the implementation of the ASARCO bankruptcy settlement and the intended redevelopment of the former ASARCO lands.”

A century of lead smelting by ASARCO at the East Helena Site contaminated soils, sediments and groundwater. In December 2009, the Custodial Trust was established as part of the global settlement of the ASARCO bankruptcy. As part of the settlement, the Custodial Trust assumed responsibility for owning, administering, remediating and facilitating reuse of thousands of acres of contaminated land formerly owned by ASARCO in Montana, including the East Helena Site.

The majority of corrective measures designed to address contamination from the former smelter have been implemented. The Custodial Trust has already documented reductions in groundwater contamination from the smelter. The Custodial Trust, in its ongoing partnership with its beneficiaries—the United States and the State of Montana—and the East Helena stakeholders, looks forward to implementing final cleanup measures and paving the way for redevelopment of the remaining ASARCO lands.

The 2018 land sales have helped fulfill the Custodial Trust’s goal of returning former ASARCO lands to productive reuse in a manner that protects human health and the environment while benefiting the East Helena community. 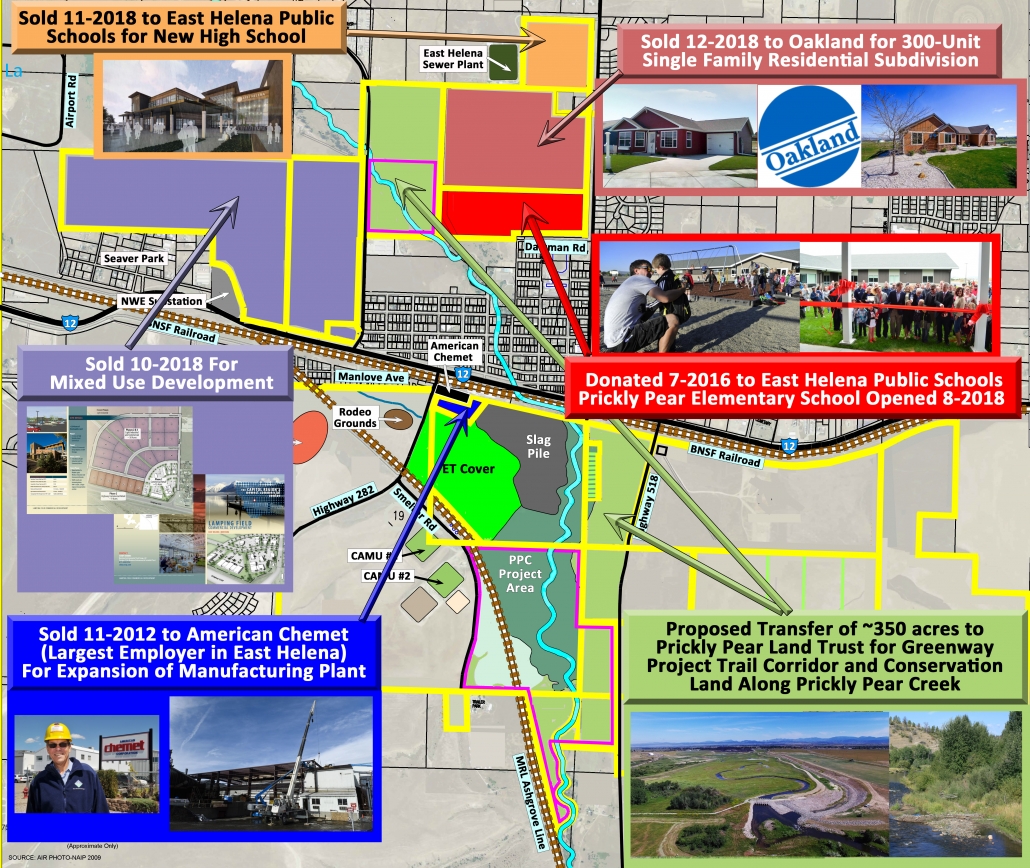 This map of the East Helena Superfund Site shows the Montana Environmental Custodial Trust’s land sales since 2012, including the sale in 2018 of three parcels totaling nearly 400 acres that generated $3 million for cleanup and paved the way for a new high school and mixed-use and housing projects.

As part of its efforts to market and sell Lamping Field, the Custodial Trust partnered with the Montana Business Assistance Connection (MBAC), a non-profit economic development corporation. In 2017, MBAC received a grant from the Montana Department of Commerce’s Big Sky Economic Development Trust Fund to help position Lamping Field for sale—and the Custodial Trust matched the grant funds.

In late 2018, the sale of 254 acres at Lamping Field to Town Pump put a pivotal parcel into the hands of an owner-operator of more than 200 businesses, including hotels, casinos and convenience stores, in Montana and Idaho. In East Helena, Town Pump operates two convenience stores, and the company’s purchase at Lamping Field comes as part of its aggressive acquisition and development strategy.

Brooks said the Town Pump purchase will encourage future reuse of other tracts too. “There’s always synergy. It sounds corny, but if you build it, others will come,” Brooks said.

Acquisition of 35 acres at Dartman Field has allowed the EHPS to proceed with construction of the first-ever East Helena High School. It will be built near the newly opened Prickly Pear Elementary School, which is located on a 50-acre Dartman Field parcel that the Custodial Trust donated to the EHPS in 2016.

The high school was made possible by an act passed by the Montana legislature in 2017, followed by two ballot referenda approved by East Helena School District voters that, first, authorized issuance of a $29.5 million bond to build the high school, and second, approved acquisition of the Dartman Field parcel for the high school. Finally, in November 2018, the Dartman Field Minor Subdivision—East Helena’s first ever subdivision—created the EHPS parcel. Construction of the new high school began in March 2019.

According to EHPS Superintendent Ron Whitmoyer, “METG’s diligence, commitment and thoughtful approach to remediating and redeveloping the former (ASARCO) lands have helped transform the community of East Helena. Together, METG and EPA have made a lasting contribution to the EHPS mission to create an educational experience for our students that is designed to cultivate an appreciation of learning, a sense of self-worth and mutual respect for their world and each other.”

According to Brooks, “Living near a school comes with many advantages for homeowners, families and communities. Gary Oakland and his team clearly understood those benefits in making their decision to acquire the Dartman Field property. Town Pump’s plans for a mixed-used development on nearby Lamping Field is also consistent with the Highland Meadows subdivision by Oakland, whose company has built hundreds of homes in Montana and elsewhere in the Rocky Mountain West.”

Oakland’s residential project is aligned with the reuse plan envisioned by the City of East Helena for this area, as reflected in the decisions by the City Planning Board, City Zoning Commission and City Council to rezone the property from an agricultural to a residential district in 2017. Oakland has been working with the City to secure approval of the Highland Meadows subdivision so that the company can break ground on the first phase of development in the summer of 2019.

According to Gary Oakland, the Custodial Trust has “developed a unique and much-needed business model to restore these devastated lands back into productive use. You are to be commended. I hope that we may work with you again in the near future.”

As part of the Custodial Trust’s remediation of the East Helena Site, more than a mile of Prickly Pear Creek was realigned to reduce groundwater contact with soil contaminants. The creek now flows through hundreds of acres of newly restored floodplain, habitat and conservation land. With the creek’s rehabilitation mostly complete, in collaboration with EPA and the State of Montana Natural Resource Damage Program, the Custodial Trust is actively exploring the potential transfer of 350 acres in the creek corridor to a long-term steward to ensure public recreational access to the waterway for generations to come.

The nonprofit Prickly Pear Land Trust has expressed interest in acquiring acreage for inclusion in the proposed Prickly Pear Creek Greenway trail linking East Helena to communities nearby. East Helena stakeholders have also voiced support for creation of a recreational resource along the creek.

“There’s currently no public access to Prickly Pear Creek or significant dedicated green space in the City of East Helena, which is one of the many reasons the Custodial Trust supports implementation of this beneficial public use,” Brooks said.

Awards. The Prickly Pear Creek project also is a finalist for the ACEC 2019 Grand Conceptor Award, which signifies the best overall engineering achievement in the country.

The three land sales generated a combined $2,881,270.83 for the East Helena Cleanup Account. Here are highlights of each sale:

About the Montana Environmental Trust Group

The Montana Environmental Trust Group (METG), as trustee of the Custodial Trust, was established in 2009 as part of the global settlement of the ASARCO bankruptcy. The Custodial Trust’s primary role is to protect human health and the environment in partnership with its beneficiaries—the United States, acting through the EPA, and the State of Montana, acting through the Montana Department of Environmental Quality —and with community stakeholders.

The Custodial Trust’s responsibilities include owning, administering and remediating two federal and two state hazardous waste sites in Montana: the 2,000-acre East Helena Site as well as hundreds of mine-scarred acres at the Upper Blackfoot Mining Complex/Mike Horse Mine, the Black Pine Mine and the Iron Mountain/Flat Creek mining area.

The Custodial Trust received $138 million to remediate and facilitate reuse of the four sites. The Custodial Trust has been managing remedial actions that have included construction of a sustainable cover system—the largest of its type in the country—and excavation of tons of contaminated material, as well as relocation of Prickly Pear Creek.

METG is a subsidiary of Greenfield Environmental Trust Group, Inc.